HMRC has published its annual assessment of the cost of tax reliefs. 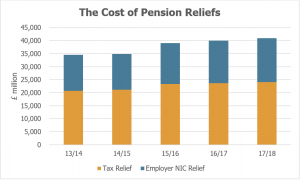 Every January HMRC publishes a table of ‘Estimated costs of principal tax reliefs’. Any Chancellor facing a budget deficit is bound to run his eyes down the list to see where the money is not coming in. After that assessment, they may well ponder whether some tweaking could benefit the Exchequer’s coffers without causing too much of a political outcry.

This year’s list has a familiar look to it in terms of the most expensive reliefs. At a cost of over £101 billion the largest factor by far is the personal allowance. The next three largest are equally untouchable for a Chancellor – national insurance contribution (NIC) thresholds and the capital gains tax exemption for main residences. Fifth largest is income tax relief for pension schemes, costing an estimated £24 billion in 2017/18.

This is a curious figure because of the way in which Whitehall calculates it. Their definition adds together income tax relief on employer and individual contributions and pension fund investments, then deducts tax charged on pensions in payment. That deduction – which in effect relates to pension contributions made over many years – is estimated to be worth £13.4 billion for 2015/16. Remove the deduction and the cost of pension income tax reliefs alone could be £38–£40 billion in this tax year, the equivalent of nearly 9p on basic rate tax.

Further down the list, the tenth entry is NIC relief for employer pension contributions. This is forecast to cost £16.9 billion in 2017/18. The government is virtually assured both income tax and NIC costs will increase substantially because of legislation raising automatic enrolment pension contributions by about 150% in 2018/19 and another 60% in 2019/20.

As the graph shows, the cost of pension reliefs has been rising anyway, despite government measures to rein them back with allowance cuts and other measures.  If you or your employer are contemplating pension contributions, perhaps as part of year end planning, it is worth remembering the HMRC’s list, and the temptation for any Chancellor to change pension relief.