Last month saw another Budget – for Scotland, this time.

The Scottish Budget in the middle of December contained potential omens for the whole of the UK with its proposed changes to income tax bands and thresholds. In the foreword to the main Budget document, Derek Mackay, the Scottish Cabinet Secretary for Finance and the Constitution said he believed his income tax measures would make the system in Scotland, “fairer and more progressive”.

Whether or not that is true, Mr Mackay has certainly made it more complicated, as the table of proposed tax rates and bands for 2018/19 shows: 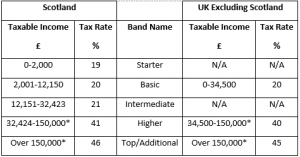 The proposed structure will result in 70% of all Scottish income tax payers paying less than they do for the current financial year, according to Mr Mackay, although some of this achievement is down to the Westminster Chancellor raising the UK-wide personal allowance by £350. Nevertheless, the other 30% will pay enough extra tax to mean a boost of £164m to the Scottish government’s income in 2018/19. The difference in bands and rates may look modest enough, but Scottish residents earning £50,000 a year will end up paying £9,015 of income tax in 2018/19 against £8,360 for their English, Welsh and Northern Irish counterparts.

Mr Mackay said that increasing the top rate of tax to 50% had been considered, but the Council of Economic Advisers suggested that this would be “unlikely to raise any substantial funds for the Scottish budget, and may in fact reduce revenues”. There are only 20,000 top rate taxpayers in Scotland and the Council was doubtless considering the likelihood, and impact, of some of them crossing the border to England to pay 45%.

The changes proposed in Scotland – which still need parliamentary approval – will be watched with interest in the rest of the UK. John McDonnell, Labour’s Shadow Chancellor, has made his own proposals for raising income tax rates, including a new top rate of 50%. He will doubtless be waiting to see how the Scottish public reacts to Mr Mackey’s “fairer and more progressive” system.

In the meantime, the plans of Mackay and McDonnell both serve as reminders that you should be starting to think about your year end tax planning.

The value of tax reliefs depends on your individual circumstances. Tax laws can change. The Financial Conduct Authority does not regulate tax advice.